Skip to content
MAY SALE ON NOW! SAVE 20% + FREE SHIPPING

These problems can be caused by poor diet and stress, as well as the widespread bacteria H. pylori.

In most cases, lifestyle changes have been the biggest prescription so far to try and minimise the effects of these stomach problems on everyday life.

Research shows that manuka honey can be useful for treating ulcerative colitis, gastritis, and gastric ulcers.

The jury is still out on whether manuka honey can help with GERD and acid reflux but many customers report positive benefits.

“According to a national survey of more than 2,000 U.S. adults, 72 percent said they have experienced at least one of the following gastrointestinal (GI) symptoms a few times a month or more: diarrhea, gas, bloating, stomach pain, frequent bowel movements, unexplained weight-loss and non-specific GI discomfort.” - Abbvie

A common prescription for stomach problems is making changes to diet and lifestyle habits, and often after this, symptoms reduce.

There’s been significant research into whether manuka honey could be an effective remedy for such issues, with its antibacterial properties.

In this blog, we’re going to dissect the effect of manuka honey on the following stomach problems, and serve you the research on a tasty, honey platter.

We’ll start by exploring the bacteria underlying so many stomach problems: H. pylori.

Heliobacter Pylori (commonly known as H. pylori) is a bacteria in the stomach that some people have and some people don’t.

It turns out that 44% of humans are living with H. pylori bacteria in their body, most likely having been ‘infected’ with it during childhood.

Although it can lead to serious illness, it doesn’t cause issues in everybody. Many people don’t present symptoms and will not even know they have it.

Pylori is not, on its own, a stomach problem. It’s when it starts to damage the lining of the stomach (slowly, over a period of time) that it can cause a range of stomach problems like peptic ulcers or even gastritis.

Typical symptoms of when this happens are similar to that of stomach cancer (pain, bloating, weight loss, bloody vomit) but blood tests, stool tests and breath tests can be used to diagnose H. pylori as the cause.

“University of Auckland senior researcher Dr Fiona Radcliff undertook two laboratory studies using BEE+ Manuka Honey to investigate its effects on the growth of H. pylori. “The results were clear, the higher the UMF the more likely it was to inhibit growth and kill the bacteria in liquid cultures. The honey rated UMF® 25+ had four times the ability to inhibit H. pylori growth and kill the bacteria as the honey rated UMF® 5+” said Dr Radcliff. “There was also a significant difference between UMF®-rated manuka honey than supermarket brands.” - Women’s Health

According to Dr. Radcliff, manuka honey can kill H. pylori, and the higher the UMF™ grade, the more effective the manuka honey will be.

Another experiment tried to determine what concentrations of honey would inhibit H. Pylori growth, concluding that only manuka honey had the power to do so:

Conclusion: Manuka honey may inhibit the growth of the H. pylori bacteria, reducing the risk of the following stomach problems in this article.

Our customer, June, shared this video of her use of our Manuka Honey for her H. Pylori. 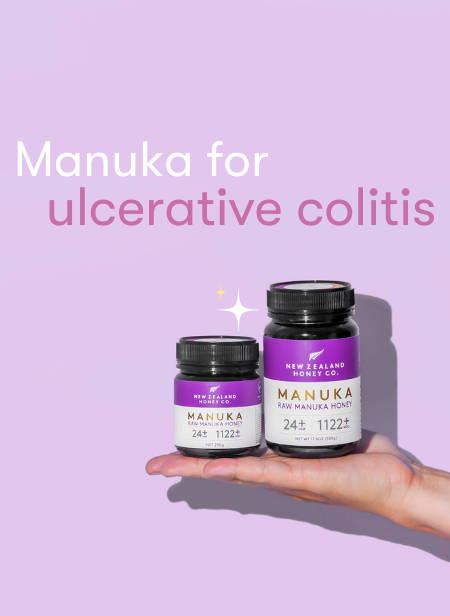 Ulcerative colitis is a nasty stomach problem that develops over time rather than suddenly. It can cause inflammation and ulcers in the digestive tract.

Similarly to H. pylori, it varies in severity.

Most people experience mild to moderate symptoms. However, if left unchecked, ulcerative colitis can develop into complications such as severe bleeding, perforated colon, osteoporosis, or even cancer of the colon.

Although poor diet and stress might aggravate ulcerative colitis, they haven’t been shown to cause it. Immune system malfunction is thought to be the culprit: an abnormal immune response can cause the immune system to fight cells in the digestive tract as well.

While we know that manuka honey can support a healthy immune system, it appears that it might directly affect ulcerative colitis in a positive way.

In a scientific study, oral administration of 5 and 10g/kg body weight “significantly reduced the colonic inflammation”. The study states that although manuka honey was successful at treating colitis in rats, more testing in humans would be needed to confirm it.

“Manuka honey has been shown to specifically decrease the inflammatory response associated with ulcerative colitis, an inflammatory bowel disease characterized by an overexpression of inflammatory cells, possibly by increasing antioxidant activity.” - DovePress

Conclusion: Seeing a doctor when you’re presenting with symptoms of ulcerative colitis is essential, but it looks like manuka honey may also ease your discomfort during this time.

Is Manuka Honey Good For Gastritis And Gastric Ulcers?

“Gastritis is a general term for a group of conditions with one thing in common: inflammation of the lining of the stomach. The inflammation of gastritis is most often the result of infection with the same bacterium that causes most stomach ulcers. Regular use of certain pain relievers and drinking too much alcohol also can contribute to gastritis.” - Mayo Clinic

If you’re starting to think these stomach problems all sound the same, you’re probably not the only one. Remember our friend, H. pylori? Yes, gastritis and gastric ulcers are commonly caused by the bacteria H. pylori.

But that’s not all - they can also be the result of excessive alcohol consumption, using pain medication for an extended period, and infections and stress.

Unfortunately, gastric ulcers are prevalent worldwide with no effective treatment. It’s widely recommended to focus on diet: feeding the body helpful substances, and cutting down accelerants.

Anti-inflammatory foods and probiotics like yoghurt and kombucha are known to have positive effects on gastritis.

There’s also been research into whether the antibacterial properties in manuka honey that generally help fight infection can be effective in treating gastritis. Here’s an excerpt from one such study:

“The objective of this study was to evaluate the use of manuka honey in the treatment of acetic acid-induced chronic gastric ulcers in rats… In conclusion, the results indicated that manuka honey is effective in the treatment of chronic ulcer and preservation of mucosal glycoproteins. Its effects are due to its antioxidant and anti-inflammatory properties that resulted in a significant reduction of the gastric mucosal MDA, TNF-α, IL-1β, and IL-6 and caused an elevation in IL-10 levels.” - US National Library of Medicine

Manuka honey has also been considered as a treatment for gastroenteritis, which is again, inflammation of the stomach lining, this time causing diarrhoea.

“Gastroenteritis has generally been treated with oral rehydration solution (ORS) that consists of carbohydrates and electrolytes. Manuka honey could be used instead of the usual carbohydrate component of ORS and would provide additional bioactivities such as antibacterial activity and stimulation of growth of probiotics, which would make the honey rehydration solution more beneficial to patients with gastroenteritis than is the traditional ORS. After some initial investigation to find the most appropriate dosage and frequency of doses, a clinical trial may be warranted.” - Waikato Research Commons

Conclusion: If you or someone you know is trying to manage gastritis, gastroenteritis, or gastric ulcers, it might be worth trying a course of manuka honey and seeing if it helps your individual case. 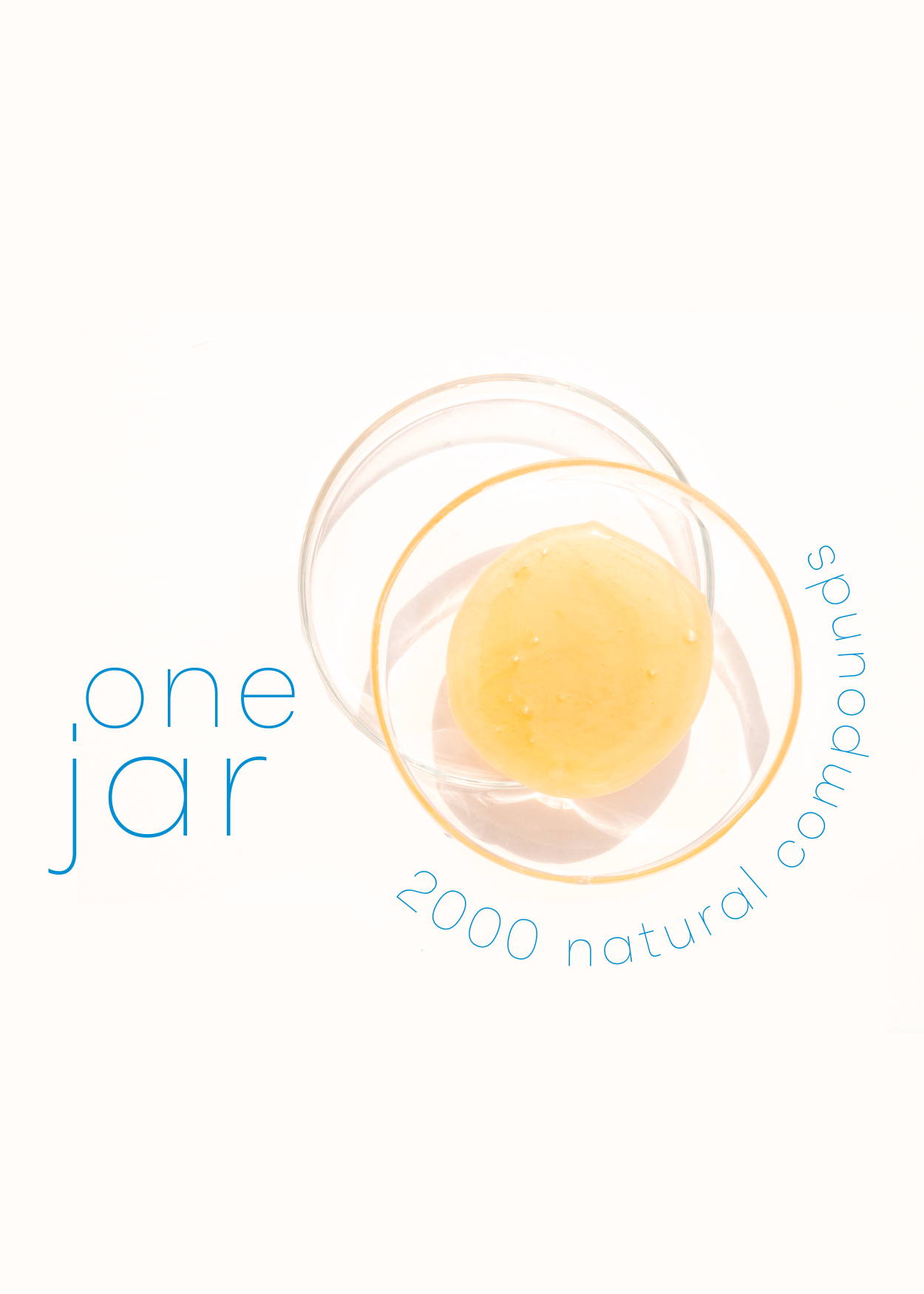 “Acid reflux happens when contents from your stomach move back up into your oesophagus. This action is also called acid regurgitation or gastroesophageal reflux.

If you have symptoms of acid reflux more than twice a week, you might have a condition known as gastroesophageal reflux disease (GERD).” - Healthline

According to the National Institute of Diabetes and Digestive and Kidney Diseases (NIDDK), when dealing with GERD, doctors generally review a patient’s medical history and if the symptoms don’t improve with lifestyle changes, then medical tests and intervention are recommended.

Although not everybody with GERD experiences the same symptoms, there are some typical telltale signs, such as chest pain more than twice a week, difficulty swallowing, sick burps, bad breath and a sore throat.

Aloe vera and manuka honey have both been touted as natural remedies for GERD.

“It is claimed Manuka Honey helps with reflux symptoms by “coating the stomach and oesophagus and healing the damages in the tissue and lining provoked by acid reflux”.

Some people swear by having a spoon of Manuka Honey up to four times a day, 20 minutes before meals and before bed time.” - The Oesophageal Patients Association (OPA)

However, not all medical professionals are on board, like Hannah Kittrell, a Physiolab manager in New York.

"Honey is a simple sugar, meaning it is easy for our body to digest," Kittrell says. "Sugars such as this cause a rapid increase in blood sugar, which produces an osmotic effect, pulling water into the gastrointestinal tract. Excess water being pulled into the GI tract quickly could actually trigger acid reflux symptoms." - Live Strong

Believed home remedies such as chewing gum, drinking baking soda with water, consuming ginger and drinking milk, are unsubstantiated and could potentially do more harm than good.

Conclusion: The research is inconclusive. It’s best to talk to your own doctor about this and see whether they think that manuka honey could be a viable option for you.

Which UMF™ Manuka Honey Is Best For Stomach Problems?

The higher the UMF™ grading, the more potent the manuka honey.

A higher potency means it has higher levels of all the good stuff: methylglyoxal (MGO), antibacterial and antiviral properties.

When using manuka honey for medicinal purposes such as treating stomach problems, these higher grades are recommended:

We’ve outlined this and more in our blog ‘How much UMF™ is enough?’, where you can see which UMF™ grades are suited to different purposes.

Who Should Not Take Manuka Honey?

Lastly, we’ve got to add a disclaimer.

Although there’s research that shows manuka honey can provide relief for or help treat the stomach problems described above, it’s imperative that you check with your own doctor or consult a medical professional regarding your specific situation..

Generally, it’s not recommended for infants under 12 months to consume any type of honey, and there are also guidelines around manuka honey for diabetics.

If you’re ready to try Manuka Honey you can shop our full range here.

FDA Disclaimer: These statements have not been evaluated by the Food and Drug Administration. This product is not intended to diagnose, treat, cure, or prevent any disease.
Back to Honey Articles